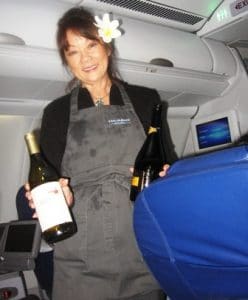 “E komo mai, welcome aboard” reads the First Class dinner menu on  our Hawaiian Airlines’ flight from Maui to  Los Angeles. It’s  just one of the many touches that make the carrier cuts above  some of the rest. We were winging our way home from two glorious weeks spend in the island.  It was a seamless re-entry from the musically slow-paced island life to the fast-paced lanes of Los Angeles.

Lie-flat seats make all the difference

While it’s never easy leaving Hawaii, Hawaiian Airlines keeps the Aloha spirit flowing. Even better are the lie-flat seats in First Class.  A diva’s delight for sure. There are cushy blankets, pillows and lots of storage space. What’s more the food is far better than many domestic airlines. In some cases, really good.

Passengers are always greeted aboard  with a smile from friendly, happy-faced flight crews dressed in Aloha attire. The female attendants often wear large orchids in their hair. Minutes after taking our seats we were offered champagne in real glasses. About an hour into the flight, drinks and warm mixed nuts were served, followed by a marvelous menu of dishes created by top island chef Chai Chaowasaree, master of the islands’ regional cuisine and owner of Chai’s Island Bistro at Aloha Tower Marketplace and Singha Thai Cuisine in Waikiki. 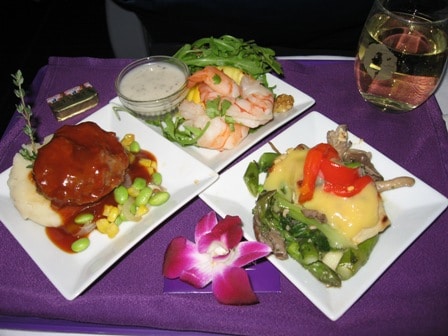 Between the two of us we had it all, and loved every bite.
Dessert was a diet-busting, mouth-watering chocolate cake. Of course you could have wines, spirits or champagne with the meal.

First Class flight attendants are always attentive, refilling glasses of wine or water and tending to your needs. . Even the First Class bathroom shines ovr others, adorned with fresh orchids, and sparkling clean.

We go to Maui twice a year. We fly over on Delta and back on Hawaiian.  Since we belong to both frequent flyer programs it makes sense to accrue miles.

They come in handy for upgrading.  And Delta doesn’t have lie-flat seats on its Maui-bound aircraft.  Those bed-like seats are made for sleeping during a night flight.

Hawaiian is Hawaii’s biggest and longest-serving airline, as well as the largest provider of passenger air service from its primary visitor markets on the U.S. mainland. Hawaiian offers nonstop service to Hawaii from more U.S. gateway cities than any other airline. The airline also offers service from Japan, South Korea, the Philippines, Australia, American Samoa, and Tahiti.