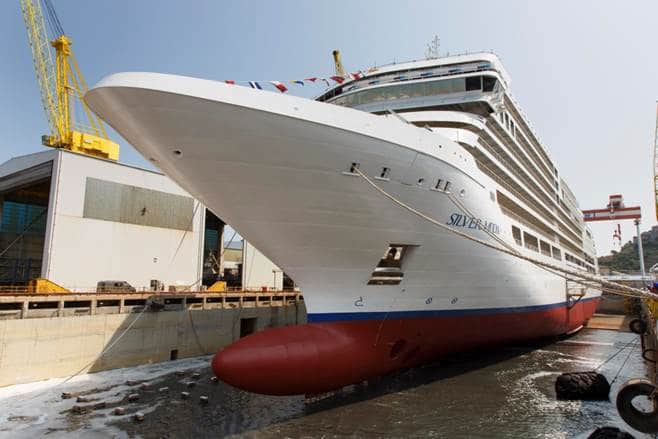 Silver Moon’s first float outGood things come to those who wait.   And we’ve been anticipating the arrival of Silversea Cruises Silver Moon for a long time now.

It’s not easy building a ship during these trying times. But today the Moon is one step closer to completion.

Giovanni Stecconi, director of Fincantieri Arcona, says “We are now nearing the ship’s delivery.”  “We look forward to celebrating that momentous occasion together.  Silversea is a cruise line whose growth we have contributed to with pride and determination. And we’re grateful for ambitious projects such as the ‘Muse’ class.”

“Silver Moon is an innovative addition to our expanding fleet of ultra-luxury ships,” says Roberto Martinoli, Silversea’s president and CEO. “Building on the success of our beloved flagship Silver Muse, Silver Moon will push boundaries in travel to unlock meaningful experiences for our guests around the world.” “Our pioneering new S.A.L.T. program is just one way in which travelers will delve deep into destinations.,

He says, “As my third with Silversea, I must say that Silver Moon’s sea trials felt a little surreal after everything that happened in the months prior.” “I was originally scheduled to travel to the shipyard in Ancona in April. I was with family in Canada at the time.”

“Unfortunately there were no flights from Canada to Ancona, so I was unable to reach the ship until July. The sea trials themselves felt special, indeed, and were held in unique circumstances. Enhanced health and safety protocols were in place, including temperature screenings, physical distancing, and the wearing of face coverings both on the ship and in the shipyard. Meal hours were extended and we ate with fewer people in the restaurant.” Captain Alessando adds that during the sea trials there were  fewer people on board than for those of Silver Muse. Safety was the primary concern. He explains that  sea trials can often be stressful, with too many people on the bridge; it was quite pleasant to have a more tranquil environment.

We are so happy to hear Silver Moon is on its way and know our clients will also be over the moon about it. And our Pavlus agents will be ready to get our clients on board as soon as Silversea opens bookings for the Moon’s debut in November 2020.  Let’s hope that sooner than later.

Part of the Royal Caribbean Group, Silversea Cruises—in which Manfredi Lefebvre d’Ovidio serves as Chairman—is known for its continuing innovations. Fares are inclusive of tips, all wines, spirits and beverages, WiFi and top amenities.

Accommodations are luxurious and spacious. The service is seamless. Silversea signature cuisine is among the best at sea. The atmosphere is chic but casual and the crew some of the most welcoming and helpful you’ll encounter.

Silversea cruises cover the seven continents. Itineraries include the Mediterranean, Caribbean, the Galapagos, both Polar Regions, and hundreds of fascinating destinations in between.