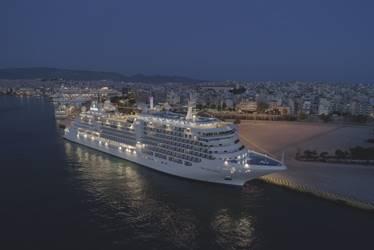 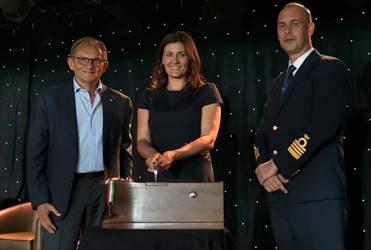 It was a Moon over Piraeus, Silversea’s new ship that is. The stunning vessel took center stage in an official christening today. Attending the gala event were notables such as  Richard D. Fain, Royal Caribbean Group, chairman and CEO and Roberto Martinoli, president and CEO of Silversea Cruises. Also on scene were  Jason Liberty, Royal Caribbean Group, executive vice president and CFO; Captain Chavdar Georgiev; Luigi Matarazzo, general manager of Fincantieri’s Merchant Ships Division; and the Honorable Minister Harry Theoharis, Greece’s Minister of Tourism, among others.

Following a blessing by Reverend Father Ioannis Patsis, vice president of Caritas Hellas, Godmother, Gaia Gaja – of the Italian Gaja Winery – broke a bottle of champagne on the ship’s bow.  Guests got to view the event on screens throughout the ship and members of Silversea’s extended family streamed the broadcast online. ,

“This is an extraordinary milestone in the history of our cruise line,” says Roberto Martinoli. “We  christened Silver Moon as the ninth ship in our fleet. This marks an evolution in 21st-century luxury travel.:

“It was an honor to cut the ribbon and signal the official naming of Silver Moon as the ship’s Godmother,” says Gaia Gaja. “Launching Silversea’s new S.A.L.T. program, Silver Moon embodies the core values that my family’s winery shares with this cruise line. We share a reverence for tradition, a commitment to unwavering quality, and a deep respect for cultural values. I look forward to journeying aboard this beautiful ship to dive deep into the Greek Isles’ celebrated culinary cultures.”

Silver Moon weighs in at 40,700 gross tons. She carries a a maximum capacity of 596 guests. She is also the line’s second Muse-class ship.

Silversea got a jump-start on the  resumption of cruises with its Silver Moon and Silver Origin. Both ships hit the waters simultaneously. The Origin in the Galapagos, the Moon in Greece. The third ship to resume operations is  The Silver Muse which sets sail  for Alaska from Seattle on July 29. 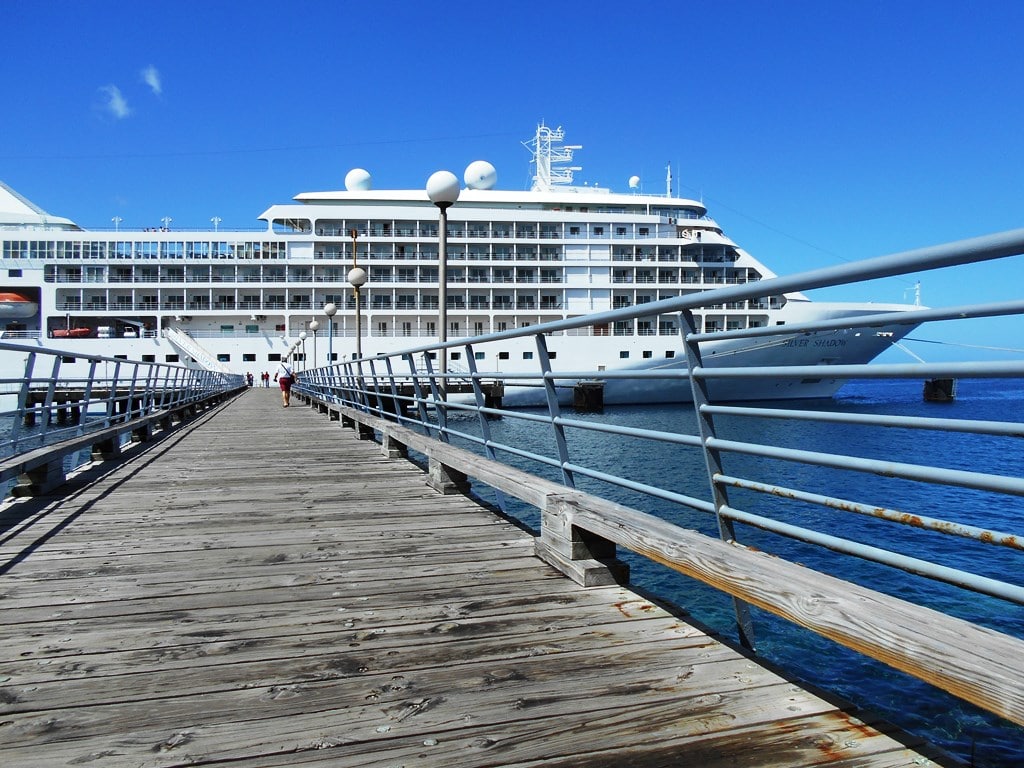 And then on July 30, a fourth ship, Silver Shadow, does an all-Icelandic circumnavigations out of Reykjavik. In November, Silversea’s next new ship Silver Dawn,  begins on her maiden voyage.