Musical productions to take center stage and many genres 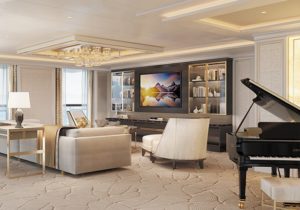 Not only will the new build dazzle with marble and richness, but she will feature five fantastic new shows to keep you entertained.

The versatile lineup  includes a dueling battle between rock and country musical genres. Also on the playbill is a story of adventure and romance and a thriller filled with intrigue.

• Bohemian Soul tracks a group of bold travelers following the sun. Along they way they  collect a rich array of music, dance, and cultural styles. The group raises their tents in Paris. There the city’s young mayor finds himself drawn to a mysterious Bohemian girl and the call of the open road. Bohemian Soul highlights an eclectic array of music and world dance styles that invite audiences on the adventurous trek.

• Diamond Run stars an international man of mystery who crisscrosses the globe in pursuit of a priceless blue diamond — and the beautiful jewel thief who wants it for herself. It’s a heart-pounding spy thriller. There are also songs by Madonna, Tina Turner, Duran Duran, Shirley Bassey and more.

• Crossroads, halfway between Nashville and Los Angeles lies the “Crossroads Warehouse.” It’s the site of a decades-long battle between diehard country and rock fans. This conflict is about the music as these two groups battle through the best rock and country hits.

• Divos & Divas, well as the Travel Diva I can get behind this one. The play celebrates the best male and female vocalists of the last seven decades.

“These captivating theatrical performances on Seven Seas Splendor are unrivaled in luxury ocean cruising,” says Jason Montague, president and chief executive officer of Regent Seven Seas Cruises. “They were created and produced by our team of Broadway choreographers and directors. We recruited some of the finest, most talented musicians and performers to deliver unforgettable and engaging productions for our valued guests.”

The curtain rises every night in the Splendor’s double-deck, modern Constellation Theater where the sight lines are supposed to be phenomenal.

Under construction in Ancona, Italy, Seven Seas Splendor redefines luxury. The 750-passenger all-suite, all-balcony ship is a work of art, from bow to stern. Just imagine more than 46,000 square-feet of Italian marble.

For anyone new to the line, Regent Seven Seas Cruises offers one of the truly all-inclusive fares in the industry. And not just tips and drinks. The cost of ticket comes with all-suite accommodations, round-trip business-class air on intercontinental flights from U.S. and Canada, and unlimited shore excursions and internet access,

You’re just a click away from reserving you space on the inaugural season of the sensational Splendor. It’s right here at Pavlus Travel where a cruise specialist will handle all the details