There is nothing quite like the charm and beauty of the historic eastern United States. It is a land steeped in culture, American history, beautiful colors, and adventure. Between New England, New York, Washington DC, Cape Cod, Boston, or Martha’s Vineyard, the Atlantic Coast states offer a wide variety of sights and activities, and cater to history buffs, shopaholics, food lovers, nature lovers, and patriots!

The Eastern U.S. also contains some of the nation’s oldest cities, giving visitors a sense of going back in time – especially when so many places to visit maintain the period dress and attitudes of the people who first settled there. It is a fun adventure and a unique learning opportunity that is not common to other destinations. Have a dose of America’s history by exploring the sites of the cities and towns that are substantial artifacts of the U.S. Colonial Williamsburg is packed with history and charm and offers visitors a chance to feel the influence of the American Revolution and how it shaped the country. On the theme of colonial patriotism, Mount Vernon, Monticello, and Gettysburg are memorable visits and essential sites for education. Discover details of the lives of America’s presidents and stand in awe in the fields of Gettysburg, where memorials remind visitors of the epic battles that helped shape America. It is a chance to experience history that can’t be found in textbooks. Wrap these up with a trip to Washington DC – one giant monument to the Nation and its history. With the Lincoln, Jefferson, FDR, and Washington memorials, Arlington National Cemetery, and the Vietnam, WWII, and Korean War memorials, there is no shortage of things to do and see. The night lights here are not to be missed as these massive stone monuments, White House, and Capitol Building come alive when illuminated and leave a lasting impression of the pride of the United States of America.

New England, one of the first English settlements in North America, contains some of the most profound beauty and culture found in the U.S. Comprised of Maine, New Hampshire, Vermont, Massachusetts, Rhode Island and Connecticut, this region of the U.S. is a peaceful but vibrant part of the country. Stroll the streets of Boston, a bustling historic center, travel north to savor the lobster, corn on the cob, and chowder for which Maine is so well-known – it’s called New England clam chowder for a good reason! Take in lovely New Hampshire and Vermont traveling to North Conway in the heart of the White Mountains, an outdoor adventure capital of New England. In Vermont’s Green Mountains, New England villages such as Montpelier, Stowe, and Essex, offer ample opportunities to enjoy local culinary treats. Visit maple farms and experience the fresh flavor of the syrup pulled straight from the trees or sip wine while learning of the vine to wine sustainable processes using locally sourced grapes. Tour West Point Military Academy, located in New York’s stunning Hudson Valley, to hear stories of cadet life, the important role West Point played in the American Revolution, and famous graduates who shaped our nation. It’s recommended to travel here during the fall to witness the most fantastic autumn colors in the nation! Cape Cod and the islands off the coast are not to be missed as they offer some of the most glorious beach scenes in the country. Experience blissful peace and sophistication on the islands of Nantucket and Martha’s Vineyard, some of the most sought after vacation spots in America and known for their elegance and colonial-style charm. Bar Harbor, a popular seaside resort, is the gateway to the beautiful landscapes of Acadia National Park. Located on Mount Desert Island, Bar Harbor is home to waterfront galleries, gift shops, and boutiques, as well as award-winning microbreweries. Top off a visit to New England in Newport the ultimate experience of luxury and opulence by visiting Cornelius Vanderbilt’s magnificent home – The Breakers.

The great New York City has been described as the cultural capital of the world and every New York day aims to prove that to its residents and visitors. New York features some of the most amazing dining, entertainment, and sightseeing in the world. Get in a visit of the highly pictured Times Square, seen in countless films and every New Year’s Eve. Take a tour of the famous and influential Greenwich Village, cruise the Manhattan harbor, and go to Chinatown for a taste of authentic New York culture. Of course, visitors don’t want to miss the fabulous Empire State Building, the 102-story skyscraper with indescribable views of the city. It’s also the once-in-a-lifetime opportunity to see a Broadway show…on Broadway! Over 40 professional theaters there are famous for hosting some of the most phenomenal performances in the history of theater. Neighboring New York, Philadelphia is another destination for history buffs as it was the birthplace of the Nation. It holds the Liberty Bell and Independence Hall, where the Declaration of Independence and the United States Constitution were conceived and carried out. It is an essential place of history pride for the United States of America.

The Eastern US could not be more packed with culture, beauty, and history – it is a vacation to create memories and stories that will last a lifetime. Patriotic passageways, New England’s autumn splendor, affluent elegance of Martha’s Vineyard and the city that never sleeps”, New York City, the east coast will dazzle visitors of all sorts!

Although credit cards are widely accepted in the United States, we recommend our passengers carry some cash (~$50.00) to use in circumstances when credit cards are not accepted or in destinations where ATMs are not readily available.

When budgeting for your trip, keep in mind that the cost of goods, including food, drinks, and souvenirs, may differ significantly from what you’re used to at home. Shopping New York, Philadelphia, Boston, and Washington DC all provide some of the best shopping. Of course if you’re visiting Washington DC, every museum offers a wide assortment of treasures and if you collect postcards, you can find one for each and every memorial.

In New York, visit the one-of-a kind boutiques of Soho and Tribeca or look for bargains in Chinatown and the Lower East Side. Don’t miss the many stores in Greenwich Village and Chelsea where you can also find many outdoor flea markets.

Philadelphia has some great antique stores in Chestnut Hill and Old City offers boutiques and vintage shops. A little more upscale shopping can be found in Rittenhouse Square and regional food specialties are available at the Reading Terminal Market.

If you visit Boston, Newberry Street is an absolute must. Great restaurants, bookstores, boutique clothing, and local markets can all be found on this classically “Bostonian” street. Harvard Square is also a great place to pick up some souvenirs.

In New England you’ll find smaller and more intimate shops with great art galleries, antique stores, hand blown glass, artisan products, and fresh preserves. Cape Cod in particular showcases a great deal of artwork, as it is one of the most iconic and picturesque destinations on the East Coast.

And if you like lighthouses, Maine is a great place to pick up a book about them or lighthouse models in all forms to bring home. You’ll smile when almost every store you enter is dotted red with images of lobster – their prided export.

When traveling to the eastern United States please keep in mind that the temperature can vary greatly between destinations. On average, the farther north you travel the cooler the destination. Coastal cities like Washington DC, New York, and Boston have a tendency to be humid during the summer months. The humid air dissipates the further inland you travel. We recommend checking the local weather in each of your destinations prior to traveling to ensure you are adequately prepared for the conditions To help you plan, below are average low and high temperatures for Eastern United States. 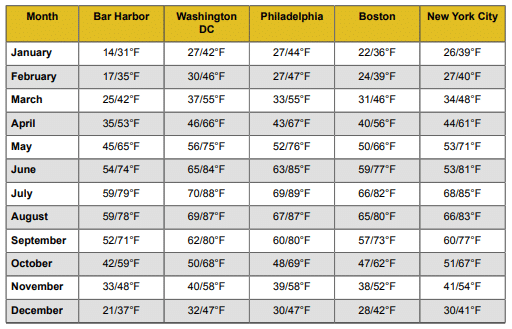 Along the East Coast of the United States, food is a major part of the culture. In Maine and the New England areas, lobster and corn on the cob, New England clam chowder, Vermont cheeses, and maple syrup are some of the essentials of East Coast cuisine. In some restaurants you can pick your own lobster, and the chowder is so rich and fresh – perfect on a day with a mild chill in the air. Fresh berry pies are also well known in New England along with many maple syrup enhanced desserts. Aside from all the lobster styles, a trip to Cape Cod means you can find the freshest hand-shucked oysters, scallops, and clams. They also boast about their hand-made fudge.

In the DC area, there is not a style of cuisine that can’t be found. With so many visitors and a constant collision of cultures, you can find just about anything. But the one thing not to miss are the Maryland crab cakes.