What’s The Time In Italy? Tipping in Italy? What’s the Average Temperature in Italy? Here’s the Answers.

No other country as Italy is so immediately recognizable on a map; a high-heeled boot and the Sicilian triangular “ball” form a unique silhouette. Italy stretches from the high, glacier-topped Alps to half-way across the Mediterranean Sea, with a coastline extending over 4,411 miles. About 75% of the country is mountainous and even though much of the terrain is unsuitable for farming, about 1.4 million of its people still work in agriculture. Most farms are small holdings (the average farm has only 17 acres). Northern Italy primarily produces grains, sugar beets, soybeans, meat, and dairy products, while the south specializes in producing fruit, vegetables, olive oil, wine, and durum wheat.

With just over 59 million inhabitants, Italy is the fifth-most densely populated country in Europe. Since WWII, it has changed from an agriculturally based economy to an industrial state ranked as the world’s seventh largest industrial economy. Today, Italy belongs to the G-8 (Group of 8 industrialized nations); it is a member of the European Union and the Organization for Economic Cooperation and Development (OECD). It has an excellent system of roads and an average of one car for every three citizens. Modern superhighways run the length of the peninsula, and tunnels through the Alps link the highway system to those of neighboring countries. Railroad lines connect all major Italian cities, and a high-speed railway links Rome, Florence, and Milan.

Italy is a new nation with a very old civilization. Until 1860, it was still a myriad of different states often at war with each other. Despite its unity as a Republic today, it is still fragmented into a deeply-rooted mosaic of regional cultures. Italians are strongly attached to their towns, neighborhoods, and family values which form the background of Italian society. They are warm, outgoing people. Time is not necessarily money to them, and the average Italian will always find the time to enjoy a good meal or drink a black espresso (28 million cups of coffee are sold every day!).

Italian food varies greatly from region to region. In the north, flat, ribbon-shaped pastas with cream sauces are most popular; in the south, the favorite pasta is macaroni served with tomato-based sauces. The most popular meats are veal and pork. Shopping possibilities are endless with magnificent craftwork and designer goods plentifully available.

Italy has the most beautiful architecture in the world. According to UNESCO, over 50% of the world’s great works of art are found here. Take the masterpieces of Botticelli, Leonardo da Vinci, Michelangelo, Tintoretto,

and Caravaggio; the operas of Verdi and Puccini; and the cinema of Federico Fellini. Add the architecture of Venice, Florence, and Rome and you have just a fraction of its treasures from over the centuries.

Do US Citizens Need a Visa For Italy?

Do US citizens need a visit to Italy? Visas to Italy are not required for US citizens. If you hold a passport from another country, please check with your local consulate about requirements for travel to Italy. All passengers traveling internationally are required to have a passport. Please carry proper identification (your passport) on you and do not leave it in your suitcase or hotel room.

It is advisable to carry your passport with you at all times. Also make a copy of your passport or take a photo and keep it on your mobile phone. One should always check with the United States Department for latest travel advisories.

What’s the Currency In Italy?

The official currency of Italy is the Euro.

Euro coins differ according to country, but they can be used in any Eurozone state. Banknotes are of uniform EU design (depicting European architectural styles throughout seven ages, from Classical to Modern times).

Keep receipts until you have left restaurants or bars, as occasionally there are spot tax checks on owners. Credit cards are accepted in the larger Italian cities (mostly Visa and MasterCard), and you should have no problems using them in shops and restaurants. However, smaller shops, especially those in rural locations, may ask you to pay in cash or have a minimum amount required to use a credit card. Prior to your Italy travels we suggest you check local currency conversion rates.

Please note that soft drinks and mineral water are often as expensive, if not more expensive than wine or beer.

Sales tax or VAT (value added tax) is included on price tags. To obtain VAT refunds (which may take up to three months to process), special forms usually have to be stamped by Customs; please ask for a tax-free shopping form with each purchase and follow the instructions for completion. Customs import charges on items shipped home are not included in purchase prices.

Where restaurant service charges are already included, round up the check by the equivalent of a
few Dollars to show appreciation; otherwise 10% is a reasonable amount, depending on customer satisfaction/quality of service. In most Italian restaurants there is also a per person cover charge, which will be added to your check.

Voltage for outlets is 220V. North American voltage is generally 110V. Therefore, you will need a converter for your travels. Adapters will be necessary to adapt your plug into the outlet, but these may not convert the voltage, so both devices are necessary.

Prior to using personal electrical appliances in Italian hotels, please check the suitability with Reception. Italy uses a round, 2-prong plug which looks like: 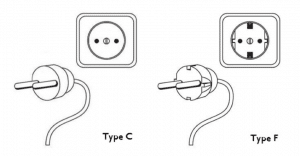 Italy has hot summers and cold winters. The south experiences mild, wet winters and very hot summers. Rain generally falls in October, January and early spring. Pack lightweight clothing with a few warm layers in spring and early fall, plus rain gear. In winter, bring a jacket in the south and a warm overcoat in the north. Summers can be hot and humid, so bring light summer clothes with a light jacket or sweater for evening.

To help you plan, below are average low and high temperatures for Italy.

Pre-vacation reading for Italy: A Traveller’s History of Italy by Valerio Lintner, The New Italians by Charles Richards, or Italian Neighbours by Tim Parks.

Eggs, bacon, steaks, and other meats may be cooked very lightly, as this is the way usually enjoyed locally; ask chefs to prepare them the way you prefer.

In larger bars and cafés, and at “Autogrills,” normally you decide what you would like, then stand in line to pay before taking your ticket to the barman to order. You can eat your meal/snack standing at the bar or at tables. Alternatively, there is a sit-down table service, which incurs a service charge.

Italian food you know and love from back home may differ quite surprisingly from the local reality and the ‘typical’ Italian fare you may have in mind. You may be surprised that, contrary to expectations, the warm, effusive service you receive in restaurants in other parts of the world is not necessarily the norm.

A FEW WORDS OF THE LOCAL LANGUAGE

US DEPARTMENT OF STATE COUNTRY INFORMATION

Know Before You Go