Today’s necktie originated from the scarf Croatian Cavalrymen wore while in the service of King Louis XIV of France around 1656. Blessed with a mild, continental climate, Croatia has much to offer in its 21, 851 square miles of contrasting mountainous and lowland scenery, with a dazzling and extensive Mediterranean coastline boasting over 1,000 picturesque islands (only 48 of which are populated), magnificent beaches, and rocky coves. It has eight national parks: Risnjak, the Plitvice Lakes, North Velebit, Kornati, the islands of Mljet and Brijuni, Krka, and Paklenica.

Croatia gained official recognition as an independent country by the European states in January 1992, and aspirations towards its European Union membership continue to advance through democratic reform and regional cooperation. Zagreb is the country’s busy capital. Agriculture, cattle breeding, fisheries, shipbuilding, commerce, road and sea traffic, and tourism form the backbone of the Croatian economy.

Jewels in Croatia’s cultural crown include the medieval old towns of Dubrovnik and Trogir, Diocletian’s Palace in Split, and the Euphrasian Basilica in Porec—all UNESCO World Heritage Sites.

Croatians love their sports and take great pride in their national sports culture and fair play. A remarkable number (for the relatively small population of 4.1 million) of top sportsmen have contributed to the world scene of basketball, handball, water polo, swimming, tennis, and boxing. Sporting legends include Kresimir Cosic, Drazen Petrovic, Toni Kukoc, and last but by no means least, fiery Wimbledon champion Goran Ivanisevic. In football, the slogan “Little Country, Big Dreams” featured prominently in the outstanding achievement of the Croatian national team in winning second place at the 2018 World Cup.

The Croatian people are also passionate about their traditions, with many local folk groups performing age old customs and dances from the islands. Fish feasts, election of local “kings,” and carnivals all add to the color and vibrancy of this “country of contrasts”—nostalgic yet forward thinking.

As well as traditional European cuisine, restaurants offer a variety of regional dishes, such as Dalmatian smoked ham, Gavrilovic salami, sausages from Slavonia, salted sardines, and sheep’s cheese. Local brandies come in flavors such as herbal, grape, and plum, and wine from Croatia’s numerous vineyards are well worth a try.

Visas to Croatia are not required for US citizens. If you hold a passport from another country, please check with your local consulate about requirements for travel to Croatia. All passengers traveling internationally are required to have a passport. Please carry proper identification (your passport) on you and do not leave it in your suitcase or hotel room.

Throughout Bulgaria, the currency is the Bulgarian Lev.

For the most current exchange rates, please go to our website at Globusjourneys.com/Currency. Dollars and Euro in small denominations may be accepted in some outlets (change will be given in the local currency). Banks and exchange offices may refuse damaged or worn Dollar bills.

Although credit cards are accepted in larger stores and restaurants (mostly Visa and MasterCard), they should be used with caution, due to the prevalence of fraud. The economy is generally “cash-only”.

Sales tax or VAT (value added tax) is included on price tags. To obtain VAT refunds (which may take up to three months to process) special forms usually have to be stamped by Customs; please ask for a taxfree shopping form with each purchase and follow the instructions for completion; not all shops may offer this service, and minimum amounts may apply. Customs import charges on items shipped home are not included in purchase prices.

Voltage for outlets is 230V. North American voltage is generally 110V. Therefore, you will need a converter for your travels. Adapters will be necessary to adapt your plug into the outlet, but these may not convert the voltage, so both devices are necessary. Outlets in Croatia usually have a 2-prong plug that looks like: 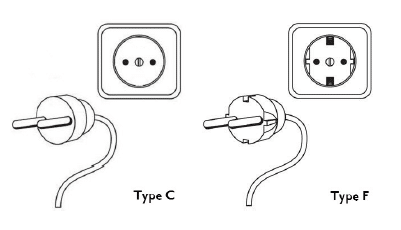 Croatia has plenty of sunshine most of the year and a mild climate. To help you plan, below are average low and high temperatures for Croatia.

Be aware of cultural and behavioral differences in Eastern Europe; you may not be greeted as cheerfully as back home; smiling is generally reserved for intimate friends! So be especially wary of people presenting themselves as “instant friends” and never accept any offer of food or drink from strangers. It is not advisable to visit restaurants/bars promoted by taxi drivers or people on the street.

Travelers should not photograph or film anything perceived to be of a sensitive nature, such as government buildings, diplomatic   missions, border formalities, or military interests.

In order to avoid scams in restaurants/bars, ask to see the menu and prices before ordering.