Its strategic location between the Atlantic and the Mediterranean, only 15 miles away from Africa, accounts for Gibraltar’s wealth of history. This small land – only 2.8 miles long and a melting pot of cultures – was a prize of the ancient world and known as the “northern pillar of Hercules.” In 711, it was seized by the Moors and named “Tarik’s Mountain” (Djebel Tarik) after their leader, and the name, distorted, became Gibraltar. Later occupied by Spain and finally recaptured by the English, this magnificent “Rock,” loved by photographers the world over, has remained in British hands since 1704.

Visas to Gibraltar are not required for US citizens. If you hold a passport from another country, please check with your local consulate about requirements for travel to Gibraltar. All passengers traveling internationally are required to have a passport. Please carry proper identification (your passport) on you and do not leave it in your suitcase or hotel room.

Even though Gibraltar is part of the UK, a single-entry UK (or Schengen) visa will not gain entrance to Gibraltar. A special visa is required, unless you are in possession of a valid UK multiple-entry visa issued for six months or more. Visas cannot be obtained on the spot.

The official currency of Gibraltar is the Pound Sterling (£). Government notes and coinage (GIP) and Bank of England notes and coinage (GBP) are equally welcome. Euro banknotes are also accepted, but the exchange rate is fixed by the outlet; more favorable rates of exchange can be found by changing foreign currency at a local bank or bureau de change.

Be aware that if you have any Gibraltar Pounds (GIP) left over, you will not be able to spend them anywhere else (including in the United Kingdom), so only change what you need for your stay, or pay in Bank of England Pounds (GBP).

Credit cards are widely accepted in Gibraltar (mostly Visa and MasterCard), and you should have no problems using them in larger shops, but some restaurants may not accept them. Smaller shops may ask you to pay in cash or have a minimum amount required to use a credit card.

Soft drinks and mineral water are often as expensive, or more expensive, than wine or beer.

Restaurants in Gibraltar often add a service charge to the bill. However, it is common to add an additional tip of 10-15% (in cash, not added to the credit card payment).

Voltage for outlets is 220/240 AC. North American voltage is generally 110V. Therefore, you will need a converter for your travels. Adapters will be necessary to adapt your plug into the outlet, but these may not convert the voltage, so both devices are necessary. Sockets in Gibraltar are the same as those in the United Kingdom, and fit a 3-prong plug (two flat prongs in line and one perpendicular). It looks like: 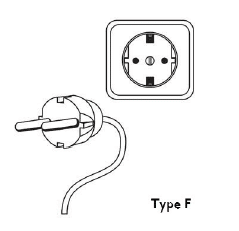 Gibraltar enjoys a subtropical, mild climate with generally dry summers and most of its rainfall occurring during the winter months. Sea breezes in summer may bring warm and humid conditions that can generate a “Rock-top” cloud or sea fog. To help you plan, below are average low and high temperatures for Gibraltar.