Lithuania is the largest of the three Baltic States, with 25,000 square miles of forests, rivers, plains, and lakes, and a population of nearly 2.9 million. It has a checkered history of domination and annexation, the latest of which was overthrown in 1991 by staggering popular protest; not even the tanks of the Red Army on the streets of the capital Vilnius could stop the overwhelming tide of change and the breakaway from the Soviet Union. In the following decades of new-found freedom, this feisty country made great strides in strengthening its economy and its links with Brussels, and in May of 2004, it became a member of the European Union.

Vilnius, the “Green City”, on the banks of the Neris River and surrounded by hills, was founded in 1323. By the 16th century, it had become one of the largest and most important cities in Eastern Europe. It has a rich heritage of gothic, renaissance, and baroque architecture.

Visas to Lithuania are not required for US citizens. If you hold a passport from another country, please check with your local consulate about requirements for travel to Lithuania. All passengers traveling internationally are required to have a passport. Please carry proper identification (your passport) on you and do not leave it in your suitcase or hotel room.

The official currency of Lithuania is the Euro.

Credit cards are widely accepted (mostly Visa and MasterCard), and you should have no problems using them in larger shops and restaurants. Smaller shops may ask you to pay in cash or have a minimum amount required to use a credit card.

For restaurant services, if a service tip is not included in the bill, tip 10-15%, depending on the quality of service.

A few coins will be needed for public toilets.

Voltage for outlets is 230V. North American voltage is generally 110V. Therefore, you will need a converter for your travels. Adapters will be necessary to adapt your plug into the outlet, but these may not convert the voltage, so both devices are necessary. Lithuania uses a round, 2 or 3-prong plug that looks like: 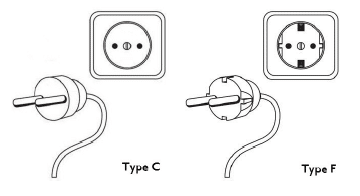 Lithuania’s climate is mild though it can be very cold in the winter. Summer temperatures are average with plenty of rain. Summer is usually its wettest season with warm rains and cloudy skies. Spring is warm and dry. Winter months are cold with snowfall a common daily experience. To help you plan, below are average low and high temperatures for Lithuania.