Images of breathtaking Norway include deep fjords surrounded by mountain peaks, glaciers, waterfalls, and it’s beautiful thousand-mile coastline. Its fjords probably capture the imagination most, but don’t underestimate the power and majesty of the mountains, the changing moods of the sea, and the charm of the tiny villages nestled along the rugged coast.

Norwegians are proud of their history as a seafaring nation, including the Viking Leif Erikson, who crossed the Atlantic to America half a millennium before Columbus, Thor Heyerdahl, who proved his point on the amazing Kon-Tiki raft, and the thrilling Arctic and Antarctic expeditions of Roald Amundsen.

Norway’s population of some five million people lives in an area of 150,000 square miles; its territory includes Spitsbergen and the Jan Mayen Islands in the North Atlantic. A constitutional monarchy governed by an elected parliament of 165 members, its head of state is King Harald V. Its economy depends on extraction and processing of raw materials, hydroelectric power, oil, natural gas, and forestry.

Knitted sweaters are a must to buy; their beautiful designs, inspired by history and tradition, are a part of the Olympic skier’s uniform. Culinary specialties include baked salmon, geitost (brown goat cheese), rommegrot (sour cream porridge), lefse (cold potato flour roll with butter and cinnamon), and multer (cloudberries). Order a glass of Line Aquavit in a local bar – a Christmas schnapps that has crossed the equator twice before being bottled—and the natives will regard you as a true connoisseur.

Visas to Norway are not required for US citizens. If you hold a passport from another country, please check with your local consulate about requirements for travel to Norway. All passengers traveling internationally are required to have a passport. Please carry proper identification (your passport) on you and do not leave it in your suitcase or hotel room.

The official currency of Norway is the Krone/Kroner.

U.S. Dollars are generally not accepted, but if in exceptional cases they are, change will be given in the local currency (Norwegian Kroner).

Credit cards are widely accepted in Norway (mostly Visa and MasterCard), and you should have no problems using them in larger shops and restaurants. Smaller shops may ask you to pay in cash or have a minimum amount required to use a credit card.

For restaurant services, we recommend a 10% tip for wait staff for good service.

A few small denomination coins will be needed for public toilets. 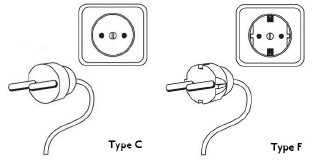 Given the latitude, Norway enjoys surprisingly mild weather. Rain falls mainly in the spring, while summers stay pleasant and winters are, well, wintry. Pack lightweight clothes with a few warm layers in the summer and autumn. Rain gear is essential in spring. Bring warm clothes, heavy coats and boots for winter. To help you plan, below are average low and high temperatures for Norway. 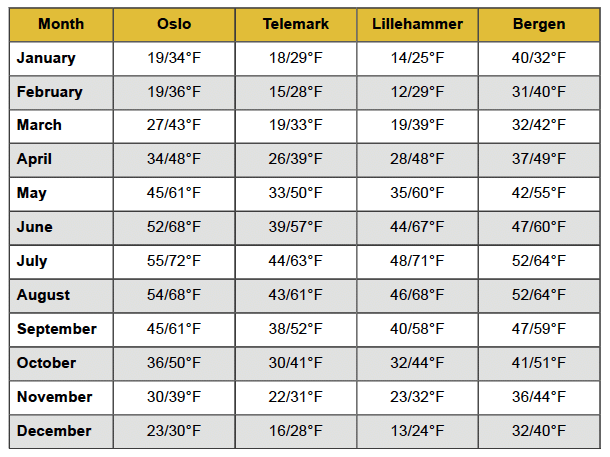