Lakes, forests, and a coastline of a thousand islands describe the home of a great outdoors people. A natural cradle for athletes, Sweden is proud to have raised sports stars of the caliber of golf players Jesper Parnevik, Lotta Neumann, and Annika Sorenstam, and tennis players Mats Wilander, Stefan Edberg, and Björn Borg.

The general standard of living is high. Entrepreneurs like Alfred Nobel and the mighty Wallenbergs laid the foundations for a powerful, industrialized nation. Many Swedish companies are among the world’s elite: Ericsson for telecommunications, Volvo and Saab for car manufacturing, Electrolux for home appliances, SKF for the world’s largest bearings company, Skanska international construction company, Astra Zeneca pharmaceuticals, and IKEA, the lifestyle store. Peacekeeping has a long tradition in Sweden, and several famous citizens have dedicated their lives to great causes: Dag Hammarskjold, the second Secretary General of the UN; Raoul Wallenberg, who saved hundreds of thousands of Jews during WWII; and Olof Palme, who strove for better living conditions in the Third World.

With a territory of approximately 188,000 square miles and a population nearing 10 million, Sweden is by far the largest of the Scandinavian countries. Vast tracts of the country are uninhabited, especially in the austere north where there are few large towns. Local specialties to try include Baltic salmon, small meatballs served with berries, or some of the many types of herring.

Visas to Sweden are not required for US citizens. If you hold a passport from another country, please check with your local consulate about requirements for travel to Sweden. All passengers traveling internationally are required to have a passport. Please carry proper identification (your passport) on you and do not leave it in your suitcase or hotel room. It is advisable to carry your passport with you at all times.

The official currency of Sweden is the Krona.

U.S. Dollars are generally not accepted, but if in exceptional cases they are, change will be given in the local currency (Krona).

Credit cards are widely accepted (mostly Visa and MasterCard) and you should have no problems using them in larger shops and restaurants. Smaller shops may ask you to pay in cash or have a minimum amount required to use a credit card.

You will need an ID card or a passport when shopping with a credit card regardless of the amount involved.

All consumer sales include a 25% sales tax. Some of this tax may be refunded when leaving the country, so save your receipts.

Restaurant services: a service tip is usually included in the price, but it is still customary to round up the check (by no more than 10%).

For taxis, 10% of the fare is acceptable or round up the fare to the nearest whole Krona if the tip has already been included in the bill.

A few coins will be needed for public toilets.

Voltage for outlets is 230V. North American voltage is generally 110V. Therefore, you will need a converter for your travels. Adapters will be necessary to adapt your plug into the outlet, but these may not convert the voltage, so both devices are necessary. Sweden uses a round, 2-prong plug that looks like: 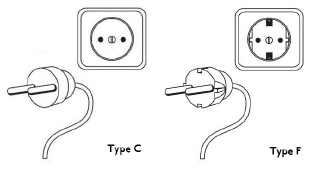 Sweden’s climate is milder than you would expect due to the warming by the Gulf Stream. Summers offer plenty of warm weather and sunny days. Late summer and early fall tend to have more rain. Winters are cold and snowy and often have long periods below freezing. To help you plan, below are average low and high temperatures for Sweden. 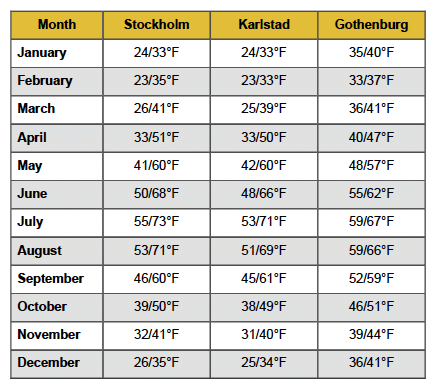