Miles of majestic natural territory braced with stylish cosmopolitan city life make Eastern Canada a rare and unique destination. The sophisticated architecture of Québec City and the glowing lights of Toronto glistening on its waters merge with spectacular natural surroundings – thundering waterfalls and pristine mountain lakes. The blend of gorgeous landscapes converges with city style and old-world class. Eastern Canada arguably possesses the greatest European influence in North America to this day. With the French-Canadian province of Québec City at the helm, this east coast region of Canada offers a taste of French style and culture that give it tremendous charm.

Romantic Québec City is the only walled city in Canada and it is known for its beautiful landscapes, royal French-style architecture, and a culture graced with a spirit of the French. Until the British victory of 1759, Old Québec was the center of New France, and today is a UNESCO World Heritage Site. Vacation in this charming city on the banks the mighty St. Lawrence River, see the Place d’Armes and Place Royal – a perfect picture of French influence. While in Québec City, visitors can venture over the bridge to Île d’Orléans – a strikingly beautiful island where agriculture thrives and flavors of the land are exceptionally fresh.

No visit to Eastern Canada would be complete without a city-stay in cosmopolitan Montreal. Rated one of the most livable cities in the world, Montreal is an important center of commerce and a beautiful representation of the strength of Canada – an economically grounded and thriving country. While visiting Montreal, a main attraction that captures the real essence of French architecture is the Notre Dame Basilica, a great source of pride for this community and with a history intimately intertwined with Montreal’s. Just west of Montreal, sits Ottawa, a lively city and Canada’s capital. With dozens of monuments, historical museums, and government establishments, there is no shortage of things to do in this city. One icon of Canada is without a doubt the Royal Canadian Mounted Police. Visit the museum and learn about the rich history of this unique band of protectors and a world-renowned organization.

Toronto, Canada’s largest city, is considered the cultural capital of Canada and is an impressively stunning one at that! Modern structure meets European tradition in this exuberant mecca of Eastern Canada, packed with cultural sites and museums, world-famous landmarks, and home to the third largest live theater market in the world. Don’t miss the opportunity to visit the top of the well-known CN tower. While some cities might offer a similar experience, nothing compares with the night view of Toronto’s city harbor and skyline. On a clear night, this beautifully illuminated vision captures the impressive colors and striking architecture for which Toronto is so well known. Sitting 80 coastal miles south of Toronto is perhaps the most well-known wonders in the world, the mighty Niagara Falls. Gracefully blending the territories of Ontario, Canada and New York State, the thundering falls stand powerful and exhilarating. Whether aboard a famous sightseeing cruise at the base of the falls or hovering over the rushing waters in a helicopter, Niagara Falls is a sight to behold!

While the western side of Canada maintains miles of rugged, untouched wilderness and endless territories to be discovered, the coast opposite possesses a uniquely different world. Still steeped in natural beauty, Eastern Canada provides its visitors with a touch of class, old and new-world architecture, adventure and cosmopolitan style. This fascinating region is a beacon of North America and a vacation spot unlike any other.

Although credit cards are widely accepted in the United States, we recommend our passengers carry some cash (~$50.00) to use in circumstances when credit cards are not accepted or in destinations where ATMs are not readily available.

When budgeting for your trip, keep in mind that the cost of goods, including food, drinks, and souvenirs, may differ significantly from what you’re used to at home. In general, Canada is more expensive than destinations in the continental United States.

Shopping
In Montreal and Québec, look for locally made pottery, carvings, maple syrup products, apple ice wine, made-in-Quebec creations, fur hats, handmade glass, Amerindian and Inuit handicrafts, and Canada themed books. Toronto features some of the best shopping in North America. For the fashion minded to the bargain hunters, it has something for everyone. There is a large artistic and craft community so look for art galleries, custom jewelers, and designer clothes. Regional specialties include glass sculptures and Inuit art.

When traveling to eastern Canada please keep in mind that the temperature can vary greatly between destinations. On average, the farther north you travel the cooler the destination. Coastal cities like Toronto have a tendency to be humid during the summer months. The humid air dissipates the further inland you travel. We recommend checking local weather in each of your destinations prior to traveling to ensure you are adequately prepared for the conditions. To help you plan, below are average low and high temperatures for Toronto Québec City, and Montreal. 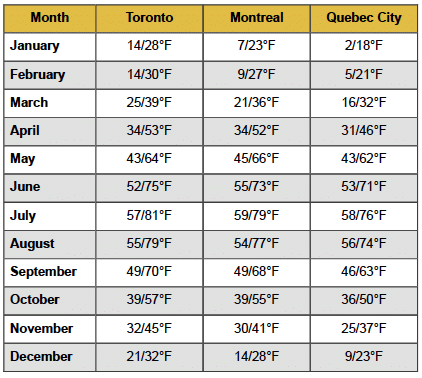 To convert to Celsius, subtract 30, then divide by 2. While not exact, this simple formula will give a close estimation..

Montreal and Québec are home to classic French food, fresh pastries, local maple syrup products, and traditional poutine (French fries with cheese curds and gravy). Savory meats, cheeses, bagels, and tourtière (meat pies) are all staples in this part of the world. Toronto, the largest city in Canada has many choices for food. Enjoy a variety of ethnic restaurants from Indian, Italian, Greek, and Chinese. And don’t forget the Canadian bacon and fiddlehead greens!